Sadly, he's not here to celebrate his 25th birthday.

I was originally going to write enough about him so that you'd understand what a great and wonderful guy he was, but I'd have to write a book. Instead, I'll just write about a few things and post some pictures. There are more pictures in the previous post that I put up here just a few minutes ago, so when you get to the end of this, scroll down further to see them or click here.

When Mark was 15 months old, his sister arrived. When he came to the hospital to visit a few hours after she was born, I told him, "This is your sister, Debbie" and he immediately leaned forward and kissed her. This is one of my favorite pictures. 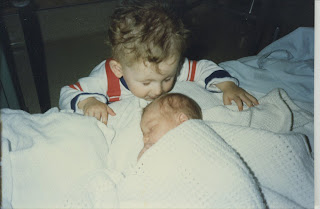 They grew up together not only as brother and sister, but best friends. 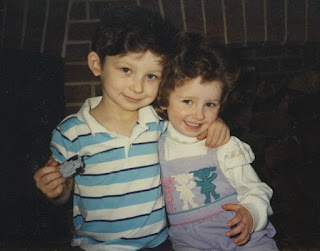 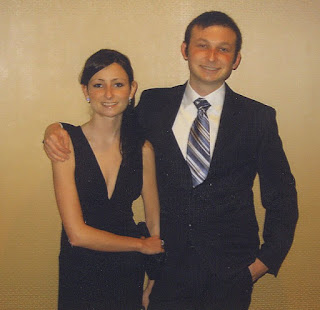 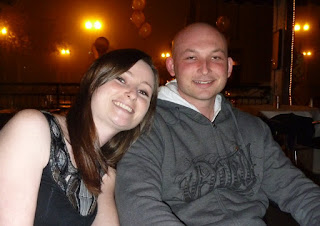 Mark was a genius. He was reading before he started kindergarten. He graduated high school when he was 15. He was a senior at DigiPen Institute of Technology studying game development and he was an incredible programmer. He would have graduated as valedictorian of his class this spring.

At school, students formed teams and developed games. Mark's team's sophomore game, "A Flipping Good Time" got a lot of recognition in the computer games industry, including being selected as one of the 10 best independent games submitted (out of over a hundred) at the Penny Arcade Expo (PAX) in Seattle last year. And it was the only student game selected for the PAX 10. They were also interviewed and had a 2-page writeup in Game Developer magazine.

Mark knew that he was smart - that he had a gift. But he was never arrogant about it. Here's what a former teacher at his school said about that:

I had Mark two years ago in my CS100 class. Mark was a man of massive intelligence and potential. He is legendary in his ability-- I am quite sure he would have been just as successful at any university-- but we were lucky to have him here.

He quietly dominated each of the classes he took, asking insightful and precise questions in a direct and humble way. I can remember him, in his first semester, asking about the dual clock inputs on the 8080 processor. He was respectful and unapologetically curious, asking, "I know the engineers must have a reason for it, but I can't figure out what it is, what am I missing?"

I know that Mark worked hard for his fellow students. His autonomous robotic car team all wrote me letters testifying to Mark's dedication. Unanimously they declared that Mark had not only been the driving force behind the team, but that he had also helped them with the rest of the class as well. The tendency of many of the top performers in early teams is to take over and prevent less talented students from working. Instead, Mark' teammates' letters testified to his inclusiveness. He got his team to learn about all the aspects of the project. In the end, with his guidance, his team accomplished feats that have never been matched. I will always have a deep respect for Mark.

And here's what an administrator at his school wrote:

As an administrator at DigiPen Institute of Technology for the past two years, I have had the opportunity to meet over 1,000 students from all over the world. Each student that comes through our doors helps to shape the DigiPen community into what it is today. Mark did more than shape, he cast the mold for excellence.

I had the pleasure of watching Mark's team (Mike's Plumbing and Tile) work so hard on their Sophomore game "A Flippin' Good Time," that when Ryan Davison came by my office and exclaimed "WE GOT NOMINATED AT PAX" I was truly proud of them. I knew that they deserved the recognition that they received.

If you were to ask any of his teammates who deserved the credit for this great accomplishment, they would all agree it was Mark. He was an enviably skilled programmer, a tutor, a benchmark to strive towards, an example to follow and a leader. But the thing that impressed me the most about Mark, was his ability to be all these things and yet remain dignified, humble and modest. He didn't brag or boast about his outstanding gpa, his natural talent in programming or his superior intelligence. He easily could have.

One of his team members gave us a bunch of pictures, including the following. 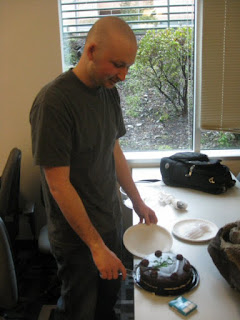 I asked, "What's with the cake?" There was one class, I think it was a computer networking class, that an instructor had been teaching for years (did someone say over 600 students had taken this course?) and no student had ever answered every question correctly, including the extra credit, on either the mid-term or final exam. Mark aced the mid-term. At the time, he told us that he was the first person to ace this test. What we didn't know was that it was a  BIG DEAL, that many in the school knew about it and that his teammates brought in a cake to celebrate it. He later aced the final exam too. Oh, the students were allowed to bring one sheet of a notebook sized piece of paper with their notes to the exams. Mark brought no notes.

What I was most proud of, though, and what made me happiest to be a part of his life was that he was such a good person. For one thing, he didn't take things for granted. A little more than a year ago, while he and I were on a hike, he told me that he was very thankful for having the opportunity to go to school without having to incur huge student debts. A while after that, he asked his dad for a loan so he could get braces (he could cover most, but not all of the cost himself). When I told him we'd pay for the braces, he was surprised and so very appreciative. He was never a kid who felt a sense of entitlement to anything and everything he wanted or needed.

The greatest thing about Mark was that he liked to help people. When he was about 11 years old, he joined his dad at a free tutoring center. He was always happy - REALLY happy - to help people understand things.

We heard from one of his teammates at school of how he helped many others with different subjects including computer programming, physics, English and math. His teammates put a video together to try to relate to us how much it meant to them to have him on their team. You can see that video here.

While he was in a math class at Irvine Valley College, there was another student who was having trouble and he tutored her and got her through the course. A while later, a co-worker of mine told me that her daughter's math tutor was no longer available. I suggested that Mark might be able to help. I asked him if he'd be interested and he said "Sure". He did help her get through her trigonometry class and, in fact, she spoke at his memorial service. Having never met her myself, I was surprised to see someone I didn't know get up to speak about how Mark affected her life.

He affected so many lives. I'm fairly certain that he had no idea of the impact he made on so many.

Mark, if you can read this from the great beyond or wherever you are, my blog title takes on new meaning now when I say, "Wish you were here."

I'll miss you every day of my life. 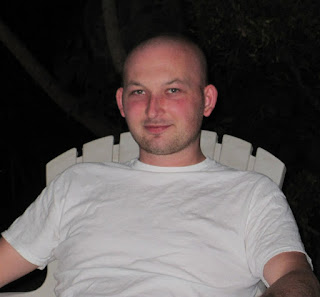 Thank you for reading this. I can't bear the thought that he might be forgotten. He's worth remembering.