Zipping along the bike paths

While visiting Herb and Martha in Scottsdale, I zipped between their place and my RV on my new bike. I bought this just before I left California. It's an EZ-GO, electric, folding bike.

This bike went the 6 miles fairly well, though I did pedal part of the way. I don't think it would have gone all the way strictly on the battery, though it's advertised as going up to 10 miles. Still, it's a great addition to the RV since it folds up nicely and fits in the shower where it rides while we're on the road. When stopped, I keep the battery indoors in a closet and chain the bike to the back of the RV.

I considered towing my car in my travels, but since the RV is only 24' long, it's easy enough to drive and park and I really didn't want to shell out the $$ for all the tow hardware. I found the bike shortly before leaving (on sale at Walmart online) and consider it a good alternate solution to tranportation while the RV is parked.

Oh, the bike paths in Scottsdale are plentiful and very scenic. A good part of the ride was alongside golf courses. Here's one part of the path I rode several times. Nice, huh? 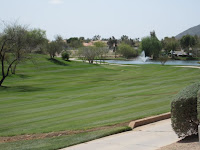